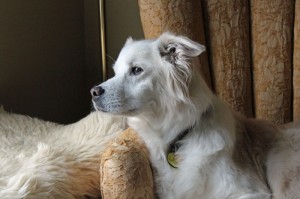 Hope’s favorite spot is the old chair in my office.

It’s been awhile since I’ve updated Hope’s Journey.  There wasn’t anything new to add and I felt I was repeating myself too much.

Hope is doing very well.  There has been no more weight loss.  In fact, he has a hearty appetite lately and we often give him more food after he has finished his normal portion.  Every night, at bedtime, he eats a whole jar of Gerber Baby Food ‘Lil Sticks.

His chemo treatments have followed the normal schedule, with no more postponements due to his white blood count being too low.  His last dosage of Adriamycin followed the usual pattern of nausea, vomiting, bloody diarrhea and lethargy, leading to another visit to the animal emergency clinic two days later for fluids and anti-nausea drugs.  We were told that would be his last dose of Adriamycin, thank goodness.  I wasn’t sure if he could tolerate that again.

Even though dogs don’t lose their fur during chemotherapy, we have noticed lately that the texture of Hope’s fur has changed.  He has always had extremely soft fur and during pet therapy visits, when people are petting him, they often comment of his softness.  But now there is a brittleness to his fur, especially along his ribcage.  The fur even looks broken off.  I expect this to get back to normal after all of the treatments are over.  That seems unimportant for now.

One thing I’ve discovered during the last two months is a magical elixir called Bone Broth!  This is broth made by slowly cooking meat bones for about eighteen to twenty four hours.  What makes this different from the usual broth we all make is the length of time it cooks.  The bones should be soft and crumbly when it’s done.  There are many recipes and information on the internet about it, but for pets you can keep it very simple.  I placed turkey neck and back bones in the bottom of a crock pot, added about 1/8 cup of apple cider vinegar and filled the pot with water.  The ACV helps draw nutrients from the bones.  You could also use lemon juice.  After eighteen hours I had a very nice clear broth.  When Hope was too sick to eat his food, he was able to drink the broth and get valuable nutrition.  All of my pets, dogs and cats, were crazy for this broth.

I took some broth to one of my pet sitting clients whose Chihuahua had stopped eating and drinking to the point they took her to the veterinarian.   All of her tests were negative so they were trying different foods and using an eye dropper filled with water to get fluids in her.  When I gave her the broth, she drank it down.  I left it there and when the clients returned home, they mixed it with her normal dry kibble and she ate it all.  So this will be my first “go to” solution for a pet that won’t eat.

Dealing with a pet’s illness creates an opportunity to learn things we don’t expect.  Once Hope’s chemotherapy is over, which should be next month, I’ll start sharing information about hypothyroidism in dogs since one of our dogs was recently diagnosed.  The good thing about hypothyroidism is that is a common disease that is easily and inexpensively treated.

Our photo for this blog is Hope hanging out in his favorite chair in my office.

love that he is feeling better! Will have to keep bone broth in mind for my fur babies as well. Sending Hope continued well wishes!

Glad Hope is doing better! And thank you for the info on bone broth, had never heard of that before.