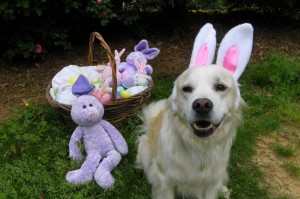 Hope is the Easter Bunny

Well, it’s been a little over a month since Hope’s last chemotherapy for lymphoma.  The oncologist gave him a clean bill of health and wants to see him in April for a follow up.

I think he’s gained a little weight.  His ribs don’t feel so sharp anymore and his appetite has definitely improved.  He will actually come and stare at me to let me know he’s hungry.  If I ignore him, he will paw at my arm and bark to make me go into the kitchen for a snack.  After spending months trying to get him to eat anything at all, it’s a pleasure to watch him enjoy eating something.

Seeing him feel better and want to eat again is so heartening.  Just last week he participated in chasing a rabbit in the backyard with the rest of the pack.  Even though I tried to stop them, they were so into the chase I might as well have been blowing bubbles.  Once the rabbit was caught, Hope took it away from Mayor, the dog who had caught it.  He came prancing over the bridge with this poor rabbit in his mouth and he was so proud to bring it to me.  Needless to say, I wasn’t thrilled but I praised him for being a mighty hunter even if he did sort of steal it from Mayor.  Tail wagging was in overdrive.

Back when he was diagnosed in August I would not have believed that seven months later he would be prancing around in his old dog way with a rabbit in his mouth.  Or that he would be able to continue his therapy dog work with Therapy Dogs International, Inc.  Just this Saturday he was at the Gwinnett Animal Shelter visiting with some children who came to visit our therapy dogs and think about adopting a pet of their own. Hope is a great example of what a rescued dog can become.

Hope’s fourteenth birthday is just around the corner and I feel confident that we’ll be having some doggie birthday cake to celebrate!  And in case you are still wondering why we would go through all of this for a dog his age, this photograph, taken a few days ago, explains it all.