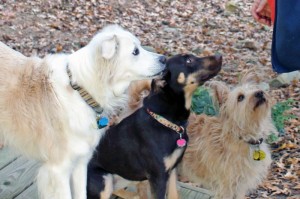 These last two weeks have been pretty rough for Hope.  He had chemotherapy on Thursday, October 30 and was given Adriamycin again.  This is the same drug that made him so sick in September, just before we left for our annual vacation.

The oncologist gave him a lower dose this time because of the previous side effects.  He also gave us anti-nausea pills to bring home to give him along with the appetite stimulant he was already taking.  It didn’t seem to make much of a difference though.  He stopped eating on Friday and we coaxed and cajoled him to eat all through the weekend, hoping that his loss of appetite would be temporary.  We were offering deli turkey, baby food, scrambled eggs, boiled chicken, but nothing appealed to him.  He would take a couple of bites then walk away.

On Tuesday morning I woke up to find black, tarry diarrhea all over the screened porch.  We have a doggy door that opens to the porch so I think Hope had made his way out there to relieve himself in private.  I don’t know why he didn’t wake us up to be let outside.  I called the oncologist’s office and told them about the diarrhea so they asked me to take him to my local vet to have him assessed for dehydration.

Dr. Churchill at Gwinnett Animal Hospital gave him lots of love, fluids and also an injection for the diarrhea, along with more medication to help his nausea.  He’s now taking three different drugs to help increase his appetite, decrease his nausea and control diarrhea.

After a few days his appetite has picked up and he’s now back to eating his raw food.  I’m also giving him about two jars of baby food a day because he likes it.  His favorite is the Gerber Graduates Lil’ Sticks, the baby version of Vienna Sausage.  He wags his tail for those.

Hope is now on an every other week schedule for chemotherapy so maybe his body will have a chance to recover each time and he will be able to maintain his weight and maybe even gain a couple of pounds.

This morning he helped me walk around the yard, looking for a hole in the fence where one of our other dogs, Mayor, escaped this morning.  Hope was the one who gave the warning that something was wrong, barking at me to come see.  So Mayor came home shortly after that and Hope supervised my repair of the fence.

This week’s photo is a favorite of mine, taken about a year ago.  Hope, April and Danny all waiting politely for a cookie.