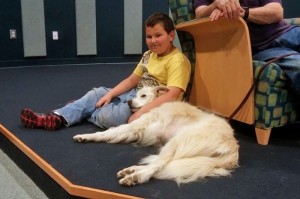 Once again, Hope’s white blood count was too low for chemotherapy, so it’s back to a week of taking antibiotics.  On Thursday the clinic will do blood work again and hopefully he will receive his treatment.  The good news is that is weight is up to 40.8 lbs.

Since I can’t tell you much about his condition this week, I thought I would tell you about the day he was a hero, outside of being a therapy dog.

About five years ago, I took him with me to purchase dog food at a small, local pet food store.  Hope and I were the only customers there so I was chitchatting with the store manager and Hope was standing beside me.  Through the store window I noticed two men approaching the entrance.  About the same time I felt and heard a low growl coming from Hope.

Now Hope has always been a super friendly, outgoing dog and I had never heard him growl like that before.

When the men entered the store, Hope’s growl got deeper.  One of the men went directly to the back of the store and started looking into the storage area, where the door had been left open.  The other man started asking about fish food.  The store manager explained that they only sold dog and cat food.  He became a little argumentative and Hope starting shaking, never taking his eyes off of the man who had walked to the back of the store.  He was still growling and I was getting more nervous about what these guys were up to.  Hope was definitely telling us something was wrong.

I guess the men decided this was not the place to rob, because they abruptly walked out.  The store manager ran around from the counter and got on her knees, hugging and kissing Hope, whose tail started wagging as soon as the men left.  She called him her hero dog and said that she truly believed they had intended to rob us, but Hope’s growl and stare scared them off.  I believed the same thing.  He could tell somehow that they were not the good guys.  He has never behaved that way again.

This event convinced me to always pay attention to what my dogs are trying to tell me.  Their senses are so much stronger than ours and I think our manners get in the way of what our gut tries to tell us.

Yesterday, Hope went to the library for Doggie Tales and made a new friend.  Our photo this week was taken there.   He loves to cuddle with people, even with someone he just met.  That’s what makes Hope a happy dog.