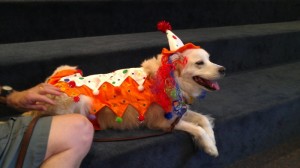 Hope is a clown for Halloween

Even though it’s been ten weeks since Hope started his chemotherapy, I still get emotional at times with the whole process. This week when we arrived at Blue Pearl – Georgia Veterinary Specialists for Hope’s weekly chemotherapy, he was very nervous.  I don’t know if he was picking up on the energy from other dogs or if he has just learned that sometimes he doesn’t feel well when he’s there.  But for whatever reason, he did not want to go with the vet tech, who has always been very kind to him.  He tried to crawl into my lap and his eyes were pleading with me not to make him go. I was trying to be tough, so I told him to go with the nice man.  As he and the vet tech rounded the corner, Hope looked back at me and the look in his eyes made me burst into tears in front of all the other people there in the waiting area.  One nice lady told me that it was alright.  “This is the place where it’s o.k. to cry.” About forty five minutes later he came prancing through the waiting area, looking for me.  The vet tech told me that was the most animated they had ever seen him and that he just seemed to have more energy about him.  He had lost a few ounces in weight, but not much.  All of his blood work looked good. On the way home, instead of getting him the usual grilled chicken nuggets at Chick-fil-A, I took him to Wendy’s where he got his very own cheeseburger.  He scarfed it down!  So, I’ve abandoned the “must eat healthy” mindset I’ve had with him.  If it has calories and he likes it, he gets it.  I’ve brought cheeseburgers home about three times since then for him.  Getting him to eat is still a challenge. One of my clients recently said that it must be a balancing act, trying to decide when to continue expensive treatments based on age, general health, etc.  Thinking about that, I’ve come to the conclusion that as long as he still has that sparkle in his eye, the excitement when the doorbell rings and that special bark, I’ll do whatever it takes to keep him with us. In honor of Halloween, I’m sharing a photo of Hope in his Halloween costume that he wore to the library last year for Doggie Tales.