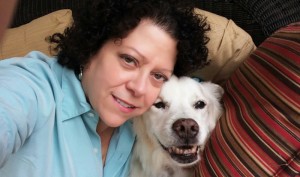 Hope enjoyed a summer of feeling well, working as a Therapy Dog, helping our other dogs chase squirrels and following me around the house.

Unfortunately, when we took him back for a follow-up in September concerning his lymphoma, we were told that the lymphoma was back.  That was something I wasn’t prepared to hear so soon after he finished chemotherapy and had been in remission for several months.

Speaking with the oncologist, we were offered the opportunity to try chemotherapy again.  After the suffering Hope went through during the original chemotherapy, we decided not to do that to him again.  With chemo, he might have another six to seven months.  Without chemo, about three months.  We would rather he be happy and comfortable for three months.

The oncologist suggested that we keep him on prednisone since we are not giving him chemotherapy.  That has made him very hungry but he does not gain any weight.  He seems to be having a lot of diarrhea.

So, he seems to get weaker each day now.  I have found him pacing back and forth in the yard and he doesn’t seem to be aware of his surroundings.  Some nights he paces and I’m not sure if it’s pain or something else.  Because of the prednisone, he has to urinate often and I usually get up three to four times a night to let him out.  He will stand at the bed, staring at me.  If I pretend to be asleep, he will bark at me, but I’ve noticed his bark is much weaker.  He’s had a few accidents in the house as well.

After I started writing this update, Hope started having black, tarry diarrhea.  We took him to the vet and they think he may have bleeding ulcers from the prednisone.  His red blood count was low normal at 32. It was 42 in October.  We have cut the prednisone dosage in half, added Sucralfate for upper gastrointestinal bleeding, Metronidazole for diarrhea and Pepcid AC to calm his digestive system.  None of these medications are going to cure his lymphoma but will make him more comfortable.

We love Hope so much that we are conflicted about when to let him go.  When is the point that his personality is gone?  How much pain is he in?  Is he suffering or just tired?

I know that the purest way to love him is not to let him suffer, but deciding when his pain is too great is going to be one of the hardest decisions I’ve ever made.