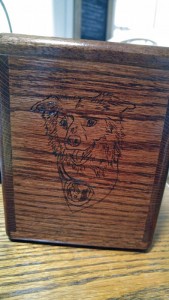 Shortly after my last blog about Hope, we had to make the difficult decision to let him go.  It has taken me three months to write about it. He had gotten progressively weaker and on his last day he tried so hard to follow me around the house and I could see how it exhausted him.  He fell asleep that day and we could see it was a different kind of sleep than normal.

With a heavy heart we called our veterinarian and made arrangements to bring him in that afternoon, January 14, 2016.

Poor Hope was so weak at that point that when he was given the sedative before the euthanasia drug, he stopped breathing and we were pretty certain he had passed before the final injection.  He died with both my husband and I holding him which was fitting since his most favorite thing was to be touched by the people he loved and that loved him back.

Few dogs get the chance to live the life of a Therapy Dog.  He was able to bring so much joy and love to so many people who needed it.  In all the years we had him, only once did he meet someone he did not like.  You can read about that in my previous blog, Hope’s Journey – Week 11.  Even then, he did something special.

We received so many condolences following his passing.  He had touched so many lives and having to tell the people at the facilities where he was a regular visitor that he would not be coming back was heartbreaking.

As life often happens, two weeks ago my husband went to Florida to see his brother who is dying of cancer.  When he came home, he had his brother’s one year old, small poodle mix, whom we named Glenda.  What a sweet little girl she is.  I can see a potential Therapy Dog in her and she is another dog that loves to be petted and held.  I know that Hope is looking down from Heaven with that big grin on his face, happy that another dog will soon be visiting and getting to know all of his old friends because life is a circle. 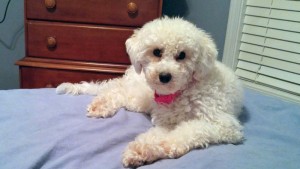 Beautiful, Cindy. Some people may wonder why we love our dogs so much and eulogized them after their death but those of us who have had a best friend like Hope in our lives understand. It’s about the pure love a dog gives during their short stay with us. And therapy dogs are even more unique in that way. They give love to those who need it the most. The elderly, those who are battling addiction, the sick, small children. If we could learn to love one another the way a dog gives love when needed, the world would be a much better place. Thanks for sharing. Those of us who knew Hope know what a very special dog he was.

Such a lovely tribute to an amazing dog. I’m so glad we had the chance to know Hope and that he brought love to so many people. Hugs to you and the rest of the family…can’t wait to meet Glenda!