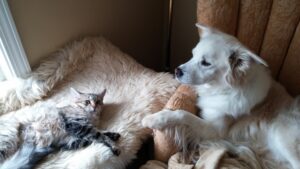 There seems to be two different opinions about whether dogs and cats can live together peacefully.  I believe that it depends on the individual pets involved.

Several years ago we adopted an adult cat that a client had rescued.  Two of my dogs were small and had been exposed to cats previously so I had no hesitation that they would be fine.  However, my larger dogs had never met a cat and I knew that would be the challenging part of introducing Harbins to a pack of dogs.

I did some research about introducing dogs and cats.  Obviously, we would not just drop Harbins into our group of dogs.  What we did do was set up a safe room where Harbins could live for a couple of weeks as everyone got used to each other.  I would take a towel and rub down all of the dogs then take that towel to Harbins and rub him with it and vice versa so that all of the pets in the home were rubbed with the smell of the others.

Along with mixing the smells of everybody together, I let the two small dogs, Ruby and Danny, interact with Harbins while the two larger dogs, Hope and Mayor, watched from the other side of a baby gate so that they could see that Harbins was part of the household now.

Eventually, I introduced Hope to Harbins.  Hope was a therapy dog and very sweet natured.  He didn’t seem to have a strong prey drive and he adapted quickly to having a cat in the house.

The last hold-out was Mayor.  He seemed to be overly excited about Harbins and I was worried that things could get out of hand quickly.  I decided that I would have Mayor on a leash so that I could control him quickly if needed.  We entered Harbins room and Mayor was practically drooling.  Harbins was a very laid back, confident cat so he did not react to Mayor.  After a few minutes Mayor relaxed and was able to get close enough to sniff Harbins.  That was all it took.  Mayor had just wanted to get close enough to sniff and say “howdy” just as he would have done with a new dog.

Sadly, Harbins had FIV and became very ill a few months later.  We did everything we could to save him but he passed away.  But because he taught us that dogs and cats can live peacefully together, we adopted two kittens several months later who have been with us for seven years now.

Now I can’t imagine not having dogs and cats together.  I realize that some dogs simply can’t live with cats.  Their prey drive is too strong, they haven’t been properly socialized, the owner’s fear of introducing the cat makes the dog too nervous, etc.  But, if you have a well-trained, friendly dog, there is no reason you can’t have a dog and cat live in peaceful harmony.

Very well written… I like that you shared the baby steps that were necessary introducing the pack to a cat. This gives someone who may want to get a cat but not know how to properly take the steps necessary to do it properly.

Nice article. I’ve often wondered how volatile that mix was. Apparently, like most things, patience and good sense win the day.