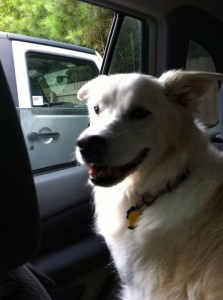 Hope is happy to be going home.

This past week has been very stressful for all of us.

After planning our annual vacation and getting the o.k. from Hope’s oncologist that we should not cancel our plans, Hope received a new drug during his chemotherapy called Adriamycin, which made him very sick. This was on Thursday. By Saturday morning, when we were supposed to leave he had stopped eating and became lethargic.

We postponed our departure for a couple of hours and boiled plain chicken for him.  After eating a cup of chicken and rice, we thought he was getting over the nausea and would get his normal appetite back and felt we could leave him in the hands of our very capable pet sitter, Helen, who happens to work for Sweet Dreams Pet Sitting.  I discovered how hard it can be to leave a pet who is not feeling well.  When Helen arrived at the house she discovered that Hope had thrown up all of the chicken and rice he had eaten before we left.

By Sunday Hope still wasn’t eating so I called the clinic that is treating his lymphoma.  They asked that he be brought in for assessment so our pet sitter spent her Sunday afternoon taking him to the clinic where he received fluids and medicine for nausea plus an appetite stimulant.  The doctor on call telephoned me in Florida and told me that the dose of Adriamycin was probably just too much for Hope’s body.  The good news was that he did not have a temperature and was already perking up after receiving fluids and the anti-nausea shot.

The rest of the week was pretty uneventful for Hope as he continued to eat and enjoy all the attention from Helen and our other sitter, Alice.

Hope’s photo this week was taken by Helen after they were finished at the emergency clinic.