Yesterday Hope’s white count was high enough that he was able to have his chemotherapy for this week.  He was given a drug he has not had before called Adriamycin.  This is administered by IV and he had to stay with the oncology department most of the day.  He was sure happy to see his dad when he picked him up.  Then it was a two hour drive back home through Atlanta traffic.

One of the side effects of Adriamycin is loss of appetite and lethargy.  Hope seems to be suffering from both today.  He has not eaten since last night and he is mostly lying around sleeping.  We offered him his favorite kind of cookie made of duck, cooked chicken, cheese, his regular raw food and canned food.  He won’t eat any of it.  We’ll see how he is tomorrow and hopefully his appetite will return, then we’ll feed him anything he wants.

Some good news is that his weight was up again yesterday to 40.4 lbs.  When he initially got sick he was down to 36 lbs.  In his prime he weighed in at 45 lbs. and that is my goal for him now.  Most dog owners I know are trying to get weight off of their pets, not put weight on them.  I’m not sure which is harder.

Earlier this afternoon I received a phone call from a former Sweet Dreams Pet Sitting client letting me know that his dog passed away today from liver cancer.  When they discovered the cancer this week, it had progressed to the point where there was no possibility of saving the dog.  The dog was not very old which makes it even sadder.

I gave Hope a big hug and whispered to him how much he is loved and how grateful we are to have more time with him. 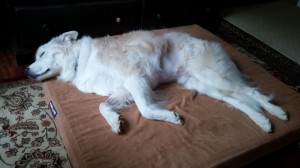